On October 23rd I got shadowbanned on Twitter, followed by a permanent suspension on October 25th. As someone who was very active on Twitter, I was surprised, shocked, and sad that this happened. Especially because I didn’t know why it happened. 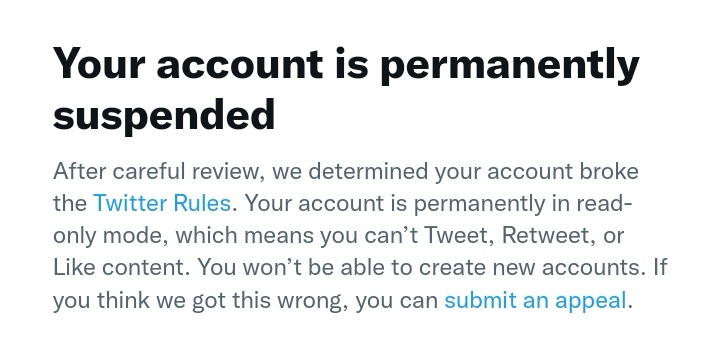 Some of you might think, “Who cares, it’s just social media?!”, and yeah, you’re right, it is just social media, but it was a pretty big deal. For me personally, I’ll go into detail about why later in this post, and generally because I got suspended without a clue why and with no notice. That’s something that shouldn’t happen on one of the biggest social media sites worldwide.
This whole incident got many people thinking, and it started some interesting discussions. Most people were in disbelief at how someone who mostly posts harmless web dev related content could get suspended out of nowhere. Many talked about the importance of owning your content and the indie web. Some were concerned about their freedom of speech, and some believed that things will get better once Elon Musk takes over. Others talked about AI and how dangerous algorithms can be.
I don’t want to get into these topics because there are smarter people who could do that way better than me, but I do want to summarise the thoughts that went through my head in the past couple of days.

I’m really glad that I have a personal website and that I blog there and not on Medium anymore, like I used to several years ago. I also started posting shorter posts like TILs on my site, but if I’m honest, I didn’t go all the way. I still post stuff on Twitter first or even Twitter only because it’s just more convenient to post directly to Twitter than to my site and then sharing it on Twitter. Of course, this is just a matter of tooling. I just have to take the time and make it easier for myself to post to my site and syndicate content.

So, I mostly already got that right, but what I learned with this suspension is that owning your content goes beyond blog posts and notes.

That’s something that surprised me: I can still see my posts, but I don’t have access to my images anymore. Most photos are somewhere on my phone, but all the other images (screenshots, code snippets, etc.) are gone now. 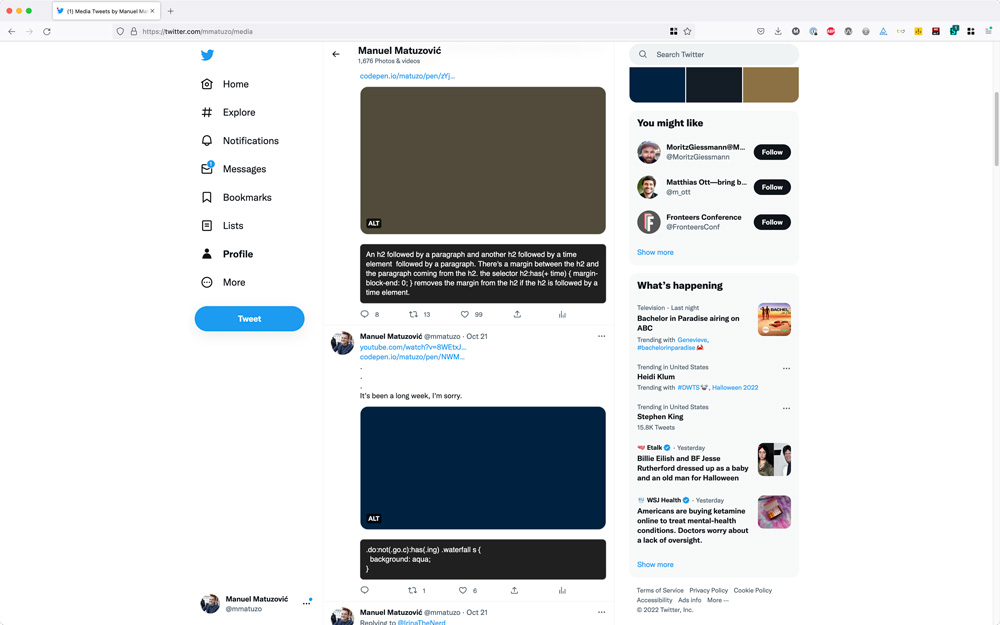 Being suspended on Twitter also means that you don’t have access to your messages anymore. I’ve used direct messaging quite a lot. Not just for small talk and other casual conversations, but sometimes also for discussing business, side projects, etc. Not having access to these conversations anymore sucks!
I suppose the person on the other end still has access to all messages. They could just copy and paste the important bits and shift the conversation to email, but it’s still really annoying.

The lesson learned here is, once conversations get important, move them to email.

This one is really bugging me. Bookmarking tweets was a feature I liked a lot. I used it to save tweets for later reference. All my “research” is gone now.

Most conversations regarding the content I created happened on Twitter or via e-mail. Believe it or not, but one of my favourite things about Twitter was that people could give me direct feedback on my posts or point out mistakes.

It’s personal preference whether you want to enable people to comment on your blog posts, but I’ll definitely add a comment section to my blog.

A day after my suspension I got an email from keybase telling me that my previously-proven twitter identity broke.

Lesson learned: It’s probably not the best idea to use social media accounts to log into or identify with other sites.

Usually when people contact me with business inquiries I ask them how they found me. Often they say that someone recommended me, but sometimes they would tell me that they followed me on Twitter and that they liked my content.

Being active on Twitter and sharing content played a pretty big role for me as a freelancer. If I’m not on Twitter anymore and if I don’t post elsewhere, will I get less jobs? Yes, probably, because I believe that – at least for me – having a healthy and active online persona is essential. Do I need Twitter for that? If you would’ve had asked me 3 years ago, I would’ve said “Yes”, but now I don’t believe that anymore. I'm convinced that putting all the effort I used to put into social media into my own site will work just as well or even better.

Most people were convinced that this suspension must have been a mistake because my account was pretty harmless, but some people shared ideas with me about why I could’ve been banned. Some theories were related to what I said in the past and how I said it. It surprised me that people remembered things I said because they perceived them so negatively. I know that I’m not very well known in the web dev community, but I literally have had thousands of followers. This means that many people read my posts and they care about what I say.

I guess what I learned here is that as a somewhat public person, even with a small audience, I have certain responsibilities and before I post something overly negative, I should reconsider my words. The ultimate goal is to not be an asshole like the many other people on social media I despise so much.

I few years ago I talked with a colleague about something, I don’t remember anymore what it was. It doesn’t really matter, but in this conversation I said something like “…and my friends on Twitter”. My colleague asked “Are so many of your friends on Twitter?” and I replied “Oh, my IRL friends? No. I’m talking about the friends I met online”. He then said, “But they aren’t real friends. You barely know these people and you haven’t met most of them.”. I replied that I consider them friends, but there was an uncertainty in my voice.

When my account got suspended, one of the worst things was that I wasn’t able to get in touch with my friends easily anymore – yes, they/you are my friends. I missed reading their ideas, jokes, and rants. It’s true that I barely know most of them and that I’ve only met a couple of people I interact with online every day in real life, but how would you call someone who writes you an e-mail shortly after your suspension to check whether you’re okay and if there’s anything they can do to help? How would you call people who flood Twitter Support with messages demanding them to reenable my account?

A site like Twitter is not just a sharing platform or a marketing tool, but also a place to hang out with friends.

It’s been a week since my suspension and I haven’t heard a word from Twitter. In the meantime Elon Musk took over and has already made some disturbing decisions and statements. Even if I get my account back, I will not use Twitter anymore, at least not how I used to. I’ve you want to stay in touch with me online, find me on Mastodon.

If there’s something I’ve learned from this whole thing, it’s that I must be more careful with how and where I share my content. A social media platform should not be the primary source. I’ve often advised small business owners to not just use their Facebook profile as their website, for obvious reasons. I, you probably as well, should also take my advice and do the same for my online presence. Create everything on my own website and syndicate elsewhere, because you never know what might happen to your content or profile tomorrow.

Now is a good time to reclaim control over your content.